While I try out MyVirtualMission.com and do a solo run from roughly home to roughly NYC, S and I used the related site, TheConqueror. I may have mentioned that S had tried their English Channel challenge to try that out. She liked it, so we joined the Inca Trail Marathon and worked that as a Team.

As we hit milestones along the way we get email postcards to tell us about the trail. At the elevation, S won’t be able to visit Machu Picchu IRL so she liked doing the Street View and seeing the trail as we went. Dividing the mileage between us it took us no time to finish the challenge (though I continued tracking until I knew I’d covered the miles IRL).

I have been there though, so I know the elevation does a number on a person in real life. It’s hiking, not walking, up steep terrain in thin air.

I almost didn’t make it when I went, and I wasn’t trying to cover anything like as much distance as we did virtually. 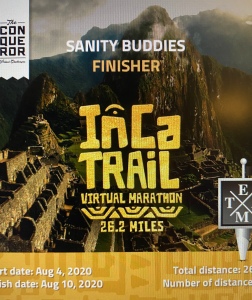 The virtual adventure was fun though. I’d do another.

And while I was doing all that, Fitbit let me know I’d hit another virtual milestone…