The conception was 6 years ago. I was in Ireland on a tour, and there was one group of brothers and sisters all on the tour together. It turned out that one of them had, in turn, taken each of their nieces and nephews on a trip of their choice as they graduated – and after the first one had chosen this tour, all the others did too. Now that all of them had gone, all of their parents who had never been, were now doing the same.

My oldest niece would have been just 12 then. But this idea of taking them on the adventure of their choice as they graduate – I loved this.

This specific trip was formed a little over a year ago, when I let first my sister and then my niece know about this plan. After a bit of discussion about the types of trips she might like, I put three options in front of her. The Ireland tour, an Alaskan cruise, or a trip to Maui.

And so, a year-plus later, my first sweet girl has graduated high school – my second sweet girl poised to start next year – and here we are, trekking just about as far as one can and still be in the States.

We start our adventure the night before, sleeping over at my folks, to make the airport trip a hair easier. My dad – her Poppa – will take us to the airport dark and early. She initially fights the wake up – she is having nice dreams – but I whisper that we’re going to Hawaii and up she comes.

In the car en route to the airport she tells us (makes her first trip video) that she’d been dreaming we already were in Hawaii!

We get through security fine – though they scan her through twice – and we are there early enough for her to get through the interminable Starbucks line for a panini (her first ever) and vanilla whipped thing and to get that breakfast eaten just as it’s time to board.

The first leg is just under 4 hours, to Denver. It’s pretty smooth, though she says the takeoff seemed to go on forever. So that we can signal each other with ear buds in, a napkin of drawings let’s us point at different expressions we draw happy, excited, tired, nervous and even “game face” (ha) as well as a ❤️.

We giggle over them but happy, excited and ❤️ get the most usage over the course of the day.

Our connection in Denver is tight and I’ve worried (/tried not to worry/) about it, but we land in the same terminal and have time for a bio break and can sit and charge our phones for just a couple of minutes before we line up to board again.

There’s a hangup when the plane isn’t ready after they have checked us in so that we are all lined up in the tunnel for quite a while, but in due course we’re on board, luggage stowed for the longest part of our trip.

I’ve set us up for a window and middle seat for this flight, so she’ll have a view when we get there.

We get the United app installed so we both have access to the in-flight entertainment. We will need it.

She watches the takeoff process intently as we leave, until we are above clouds and the view gets boring.

We never point at the sleepy face we’ve drawn but both of us nod off in the course of the flight.

Finally – oh finally – we start the descent into Maui. It’s long and slow – I find this harder on my ears than a quick sharp descent but sweet girl seems unfazed. When the island comes into view, she looks out the window.

At last we are on the ground and outbound, both of us starved by this time – long since breakfast and midday granola bars. We get our rental car and wind our way towards the hotel – there’s no recognizable eateries until we are almost to the hotel and we pull into a shopping center in hopes of food.

Burgers fries soda and a small pineapple shake later, we are worlds better!

We find the hotel, navigate the checkin process, walk around to locate the restaurant, pool, and beach …

Pool beach and pool will round out our evening before we get our showers and fall into bed. We don’t make it past 8pm. It’s 2am to us.

But tomorrow is an early day, we’ll be glad that it won’t feel early to us. 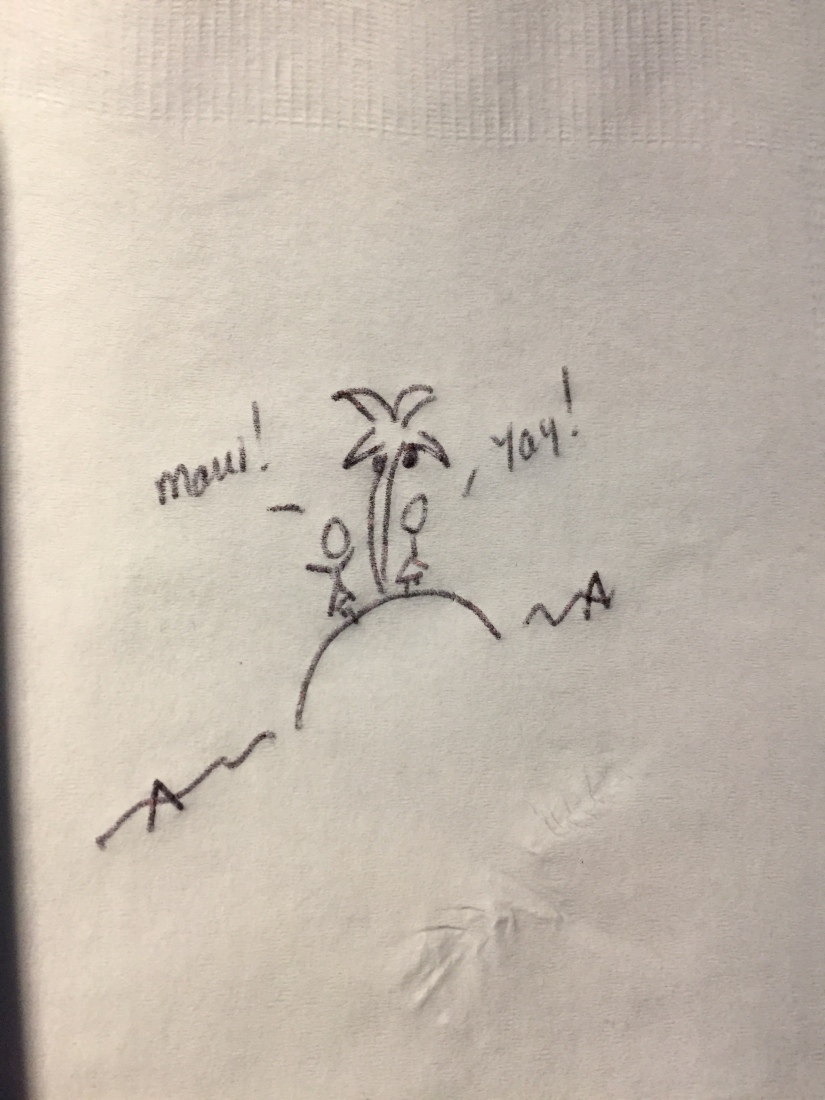 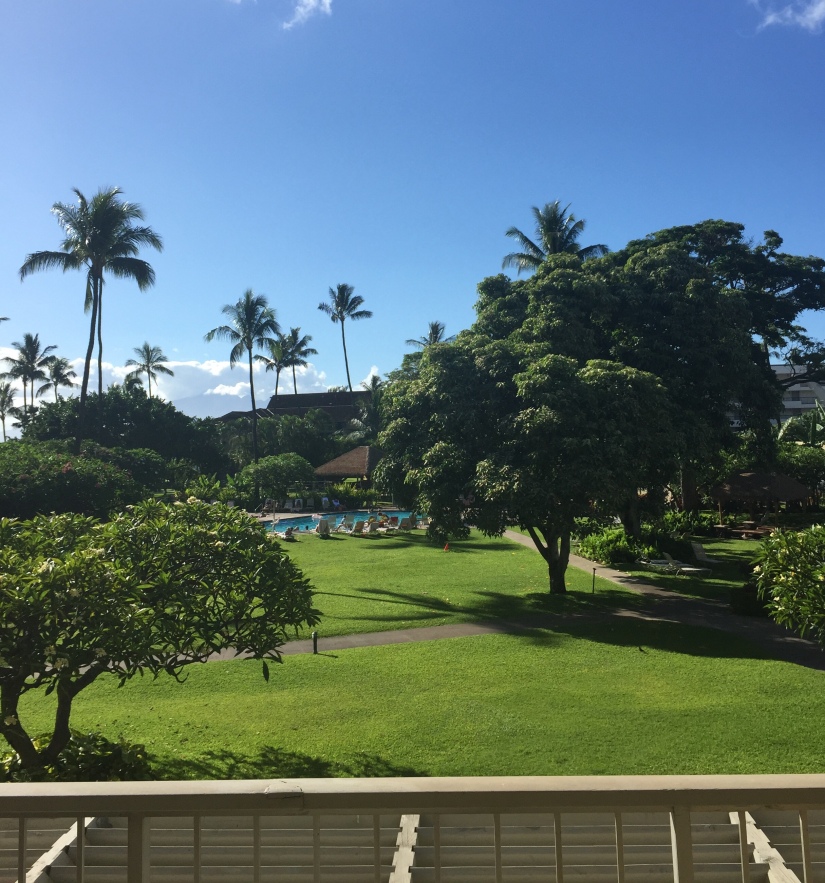 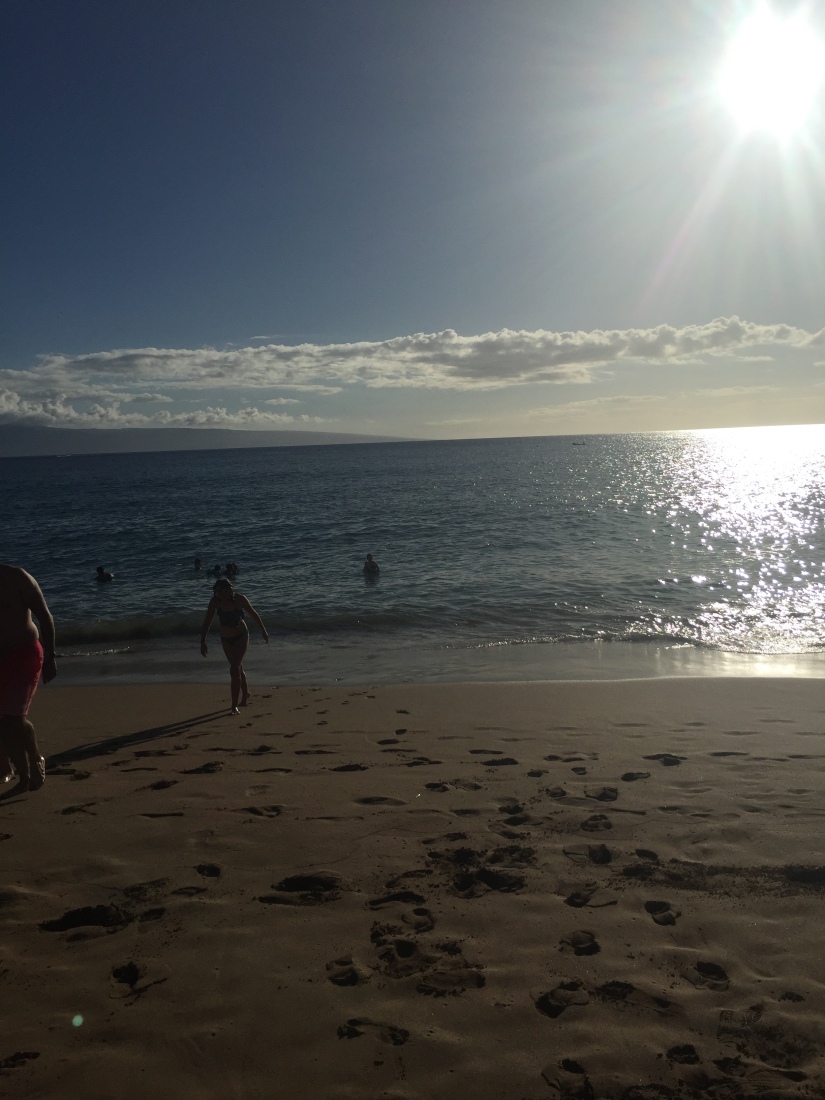