In seventh grade, we had the option to take a language: French or German.

Spanish, which would have been more useful, was not offered until 8th grade. Opportunity missed.

What teen girl, given the choice, wants to learn German when French is an option? (Actually some did, but cmon.) plus we lived in New England where the proximity to Canada made it almost sort of seem potentially useful.

I don’t live in New England any more. My first job was at a company that was owned by Cuban exiles and more than half the company, by the time we were acquired by the larger firm, spoke Spanish.

By that time, I had picked up a little Spanish… mostly greetings and food.

I wanted to learn Spanish. By that time, there was the boy and though his English was fantastic it seemed problematic that I couldn’t say anything of substance to him in his native language, his heart language.

I tried Rosetta Stone (it was very precise about getting the accent right, so much so that the boy, sitting next to me, would tell me, “You’re saying that perfectly,” while RS would insist I had it wrong and make me repeat it. Again. And again. Ad nauseum.)

But always I would get just so far and hit a wall. I have some kind of mental block, it seems.

Now, Duolingo doesn’t care how bad my accent is. And 26 days into it, I’m mostly enjoying it and occasionally amused and/or troubled by the sentences it tries to teach me. 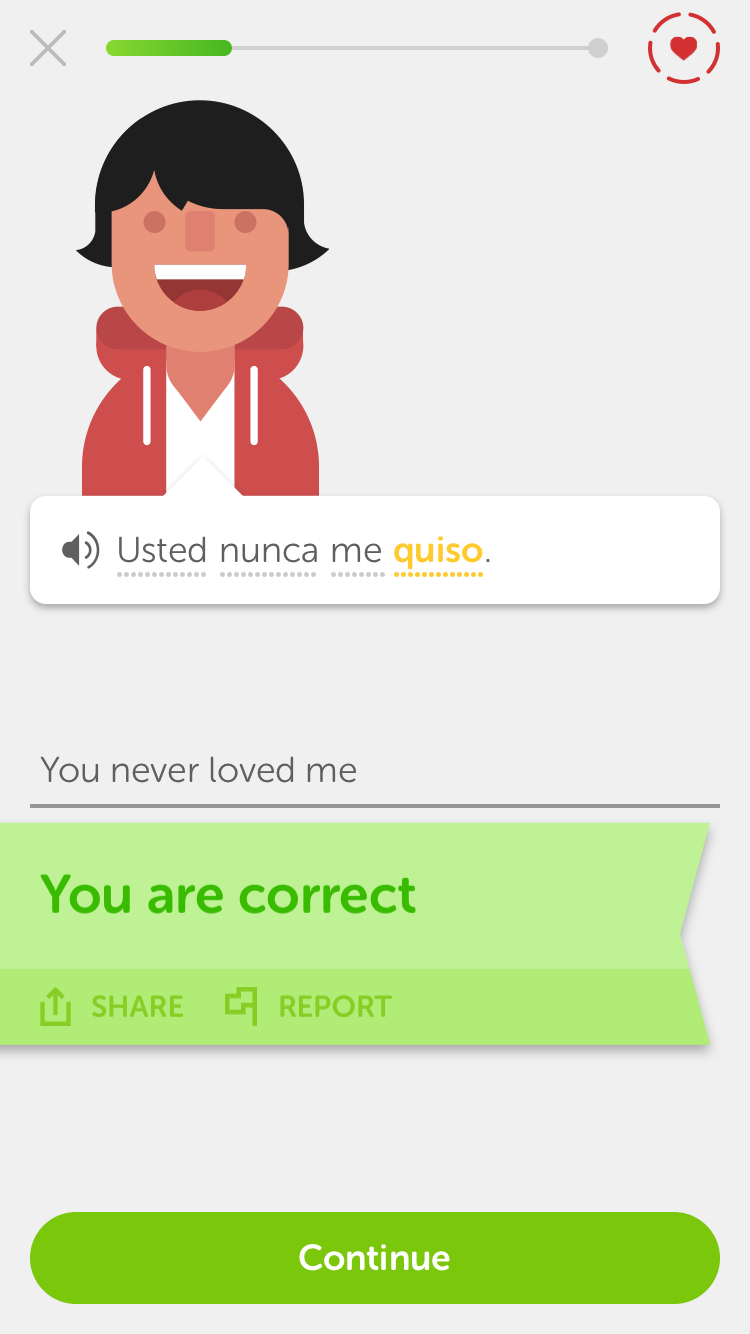 Really? These are the best phrases to teach me to apply what I’ve learned?

But I’m also 26 days in and not making all that much traction into other verb tenses. Just how useful will it be, really, to be able to say that the bear eats fish? That we go to the  building?  That the cup is big?

So I’m once again losing enthusiasm for Spanish. I know it would be useful in life, so many places I’d like to visit where it would be helpful and so many people here who speak it — I want to stick with it and press on, but I am tired and confused (what is with se all the time and I’m ok with the concept of reflexive verbs from French but is comer really the best example of it, Duolingo?). I’m thinking maybe I should have used this to refresh my French (which is almost gone at this point but maybe could be awakened and at least I had some actual teaching on the concepts, to help me along.)

And then, maybe I’d be thinking harder about going back to Quebec. Visiting Paris and the French countryside, or French-speaking Switzerland. Who knows?