Slight delays on departure, but nothing that can’t be made up in the sky. I arrive essentially as-planned in Vegas. (Vegas, Baby!)  The only parts of our itinerary I have visited before are at either end, so I am unsurprised this time by the slot machines in the Las Vegas airport, only by their relative silence. 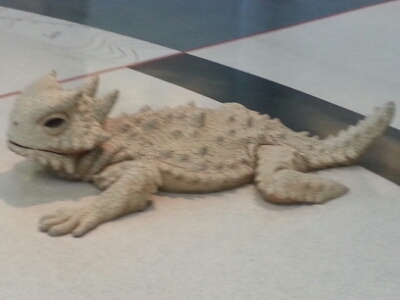 The (previously-online-only) friend I was intending to meet for a late lunch/drink (before the folks land) can’t get off work early after all (just as well, vacation days are precious)

but joins me at my hotel lobby a few hours later. I meet her and her husband, both (unsurprisingly) genuinely lovely people. She has been as nervous about meeting me as I have been about meeting her.

We have a drink and bar-snack food and then decide to walk to the chain restaurant behind my hotel for a bite of real food. Just as we settle, my parents call to let me know they’ve landed. The sky opens (it rains hard & fast in the desert) while I am on the phone with them, trying to huddle under a mesquite tree to keep the phone dry. My friends must be starving by this time, so we continue to the restaurant and order appetizers. My parents show up a bit later and I bring them over. You never know how these things will go, but they go fine.

A few hours later, we say our goodbyes to my friends. My folks and I are due to begin our trek in the morning, and decide that we will get started an hour earlier than planned, since my scheduled departure time at the other end will allow us the additional rental time. And so the plans are made.

And so ends the first (partial) day of our trek…