Part two of my tale of recent technology failures will stay on hold for a few more days while I tell you that at the same time I was buying my fabulous new toaster oven, I was also picking out a new bedding set.

I’ve been in the market for a new bedspread, and associated accessories, for at least a couple of years. Probably longer, but that’s about the window of time at which the fact that 10+ years was starting to take its toll on the bedspread stitching became apparent.

The problem of course is that I love my old bedspread set. I mean, I love it. Plus I had all the with-its.

The dust ruffle. The regular shams. The European shams. I even had the sheets, which of course no longer worked after I upgraded my bed, but still. I had everything except curtains, actually.

Plus, as it happened, the set had a color palate that matched the even-older lamps and framed pictures in the room. Which are all trimmed in green. A green that’s somewhere between Hunter and Kelly and isn’t even remotely available in any product on the market today.

Yes, I know that means it’s dated. I don’t care! I loved that set! I loved my whole bedroom!

So anyway, when I upgraded my bed, the sheets no longer fit the taller mattresses that are the standard today. I bought some basic brown and off-white sheets, knowing that the rest of the bedding would have to go soon too. I found some curtains in a toffee color that didn’t clash with the old stuff but would be neutral enough to go with something new…

A year later, I was still searching for that “something new.” 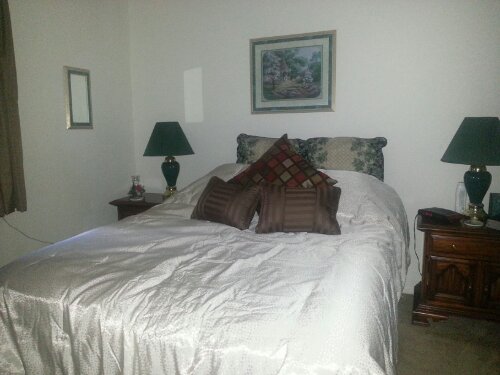 I bought a new bedspread/dust ruffle/shams set. It’s as neutral as neutral comes. It’s actually a gold color, but it got washed out in the picture. Sorry.

Clearly I will have to make further changes to pull it all together (sigh) but (for now) I can still use my old Euro shams. And lamps. And pictures. Even if the look until then is rather… eclectic.

As it happens, I also found throw pillows that exactly match the sheets I bought way-back-when.

So I am counting this little spree a win. Twice over, because I had a 20% off one item coupon, and that made it even sweeter.