Just before I left for Ireland, I accidentally and providentially discovered that my toaster oven was well on its way to becoming a fire hazard.  So when I returned, in the middle of a heat wave, getting a new toaster oven (with which to heat foods without super-heating or burning down the apartment) was a priority.

So I shopped for one. My parents have one by the same manufacturer as the one I’ve had (quite happily) for probably a decade, but their new, upgraded version requires an advanced degree to operate and even at that, doesn’t make toast, so I knew I was avoiding that model.

I went online. I read reviews.

Guess what? We can go to space, but we can’t make toast. What the heck is that all about?

Plus most toaster ovens are these very complicated, trying-to-do-it-all-but-nothing-well affairs, when really: I just want to be able to make toast, toast a bagel, and reheat the occasional slice of pizza. It doesn’t have to be this complicated!

So finally I looked at the reviews by America’s Test Kitchen (love that show) and they named their toaster oven winner (at about $250 a pop) and their best buy (a Hamilton Beach Set & Forget Convection version at about half that, still ridiculous but theoretically also still functional) so I shopped for the latter.

And 2 days later, I had my new toaster oven delivered to my office.

I hauled it home.

I hauled it up the stairs.

I carefully unboxed and set it up and read the instructions. (Yes, I actually did.)

And then I plugged it in…

And got an annoying BEEPING sound and a “ERR” code.

Fortunately, I still had that user manual handy, so I could read the details.

That’s only answered during office hours. Which is (a) wicked helpful (NOT) and (b) not boding well for there being a quick solution that doesn’t involve returning the item. 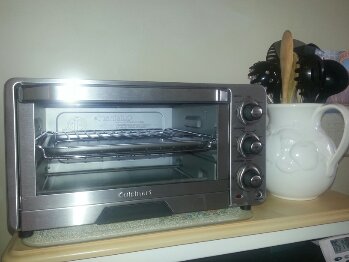 Heck with that. I returned it the next day (thank you Amazon.com for making that simple, because HB was a big fat FAIL) and this weekend I shopped for a replacement.

Voila, my new toaster oven. It’s a Cuisinart. And guess what?

Without requiring a doctorate in electronics.