My flight didn’t require me to go to the airport until the afternoon, so I stopped at the Crown Center for a caramel macciato and English toffee midmorning snack, and visited Liberty Memorial/WWI Memorial while I burned it off again. More or less. 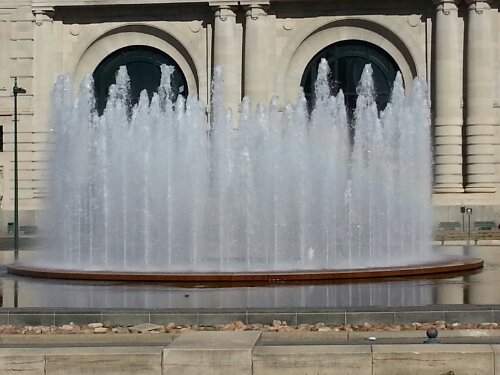 I had plenty of time to turn in my car (a total of 2283 miles from Jackson, Mississippi to Kansas City, Missouri, via a highly circuitous route) and make my flight with scads of reading time to spare.

Smooth sailing to Albuquerque, where the temperature differential was far in my favor. With apologies to my friends whose livelihoods are dependent on some good, prolonged cold, and who probably hope the chills I experienced mid-USA were signs of things to come… I’m liking this much better. I vastly prefer not to shiver if it can be helped.

Why, I might not even have to crank up the heat in the hotel room by 10 degrees tonight. Won’t that be novel?

Dinner was at Rudy’s (which has two locations here in ABQ). The atmosphere is casual in the extreme, and their BBQ brisket was delicious. Highly recommended.

But I have to call it an early next night… Activities at the Fiesta start at a crazy hour of the it’s-optimistic-to-call-that-morning.